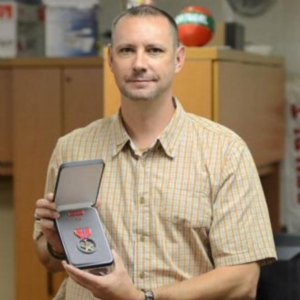 Chris joined the United States Marine Corps in July of 1987. During his time with the Marines, he served a two-year tour as Security Forces in Cecil Field, Florida, and a two-year tour as Infantry Soldier at Camp Lejeune in North Carolina. This included an 8-month deployment to Desert Storm. He was Honorably discharged in 1991 from the Marines.

In February 2001, Chris joined the RI Army National Guard and retired in January 2019. At the time of retirement, he was a 1st Sergeant with the 43rd Military Police Brigade. During his time with the RI Army National Guard, Chris worked with the 115th and 169th Military Police Companies with two combat tours in Iraq (2003 and 2007) and one combat tour in Afghanistan (2012). He was Awarded Bronze Star for meritorious service in 2012.